Palestinians in Lebanon: being and wanting to truly exist 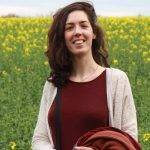 Photo by Laure Delacloche - Emm Ryad, standing at the top of the stairs that lead to her old apartment in the Palestinian camp of Shatila in Beirut.

In the spring of 2021, an 11-day war between Israel and Palestine erupted, initiating a period of anxiety and anger for the approximately 260,000 Palestinian refugees in Lebanon. However, this conflict is also a source of hope and pride.

At parties in Beirut in early May, I felt that I was completely off-base when I explained that I was working on Palestinian identity. The economic crisis and the electricity, medication, and fuel shortages seemed much more urgent. And then the name Sheikh Jarrah, a neighborhood in East Jerusalem where the Israeli authorities threaten Palestinian families with eviction, appeared on social media. Rocket fire destined for Israel, a country unrecognized by Lebanon, rent the sky as the bombing of Gaza began. In Lebanon, demonstrations in solidarity with Palestine escalated. Soon, the war on our neighbours to the south dominated nearly every conversation.

A few days after the cease-fire, I meet Ahmad (1), one of the approximately 260,000 Palestinian refugees living in Lebanon today. A cool beer in hand, as Beirut’s heat demands, Ahmad assesses the situation: “After 11 days of war, despite our sadness for all the human beings that were killed, we are proud. The whole world is listening to us again, the lot of Palestinians has come to the center of the international stage. It means we can hope and dream,” he says, all the while grilling me on my support for Palestine.

In his circle, a 73-year-long discussion has resurfaced during the conflict: “What would happen if, all at once, the Zionist system was revealed to be falling apart, that the Israelis were leaving, and that we could go home to Palestine?” The right to return of those who left as the Arab-Israeli wars erupted, and who have taken refuge in Lebanon and in other countries is the common cause of Palestinian refugees. It is supported by Lebanese politicians, and is on many people’s lips. “Personally, I would have to consider it very carefully, it would obviously depend on the conditions there,” confides this large man, with dreadlocks and a graying beard. “But at least I would have a choice again.”

To explain Palestinian identity in a nutshell, he shoots me a question: “Do you know the story of the tomato?” I shake my head. “We Palestinians say "bandoura" for tomato. The Lebanese saybanadoura". If I speak Palestinian, Lebanese people can identify me on my accent alone. My ID card also defines me, of course.”

Discrimination based on nationality

Nationality is tantamount to discrimination. Palestinian refugees that the Lebanese state refuses to nationalize on the pretext of not compromising their right to return cannot practice certain professions, like engineering. Their access to education is more limited, and even if they are employed, they are unable to benefit from Lebanese social security. Everyday discriminations must also be considered, and deprive some refugees of rental housing or a (theoretically accessible) job.

Palestinian refugees in Lebanon have been in this situation for decades, and this topic constitutes a rare consensus spanning the political landscape. “There is only one difference between the parties, those who want the living conditions of Palestinians to be terrible, and those who want them to be less terrible,” was the blunt explanation from an office of the United Nations Relief and Works Agency for Palestine Refugees in the Near East (UNRWA). This agency was founded in 1949, and provides education, healthcare, social assistance, and a portion of the infrastructure for Palestinian camps.

In Lebanon, only 60% of Palestinian refugees live inside areas demarcated by the Lebanese government (2), whereas the other half lives outside them. “This place where I live also defines me,” adds Ahmad, an employee in the development sector, who goes back and forth between Beirut and the Rashidieh camp. The rockets were fired at Israel from this camp in southern Lebanon during the war in May. The living conditions are unsafe, and as the surface area has never expanded and generations of refugees cram together, the camps are now overpopulated.

Over the course of 73 years, the composition of the camps has also changed, Emm Ryad states, another Palestinian born in Lebanon, who lived in the Shatila camp to the south of Beirut for 44 years. “It was the civil war [from 1975 to 1990, editor’s note] that changed everything. Before, everyone knew everyone. It isn’t like that anymore.”

“The massacre that took place in 1982 (3), and then the War of the Camps between 1985 and 1988 (4) almost destroyed Shatila. Either the residents died or found refuge elsewhere,” Marie Kortam, an Associate Researcher in sociology at the IFPO (French Institute of the Near-East), explains. The latest change in population was brought on by the war in Syria. Since 2011, many Syrian refugees have settled in the camps, partly because the housing is cheaper than in other areas of Beirut. Today, alongside the Syrians and the other foreign workers, as estimated by Marie Kortam, “Palestinians represent only between 20 and 25% of the camp’s population.”

One million Syrian refugees was seen as a source of added difficulty for the many Palestinians who experienced their arrival. “The war in Syria is over, why don’t they go home?” fumes Malak, a young Palestinian employed at a café in Beirut. She was hurt directly by the Syrian competition, which brought salaries down. “Many Lebanese share this sentiment, and criticize them for having elected the same dictator for years,” explains Maymana Azzam, a 30-year-old Lebanese woman and a friend of Ahmad’s. “I’m a humanitarian worker, so I know that these Syrian people did not choose to be here,” she rectifies. “However it is true that Palestinians are now a part of our social fabric, because they have been here for so long! In a way, despite their terrible living conditions, they have found their place. And we also have a common enemy: Israel,” she adds, an ardent defender of the right to return.

Emm Ryad, however, is not one of the Palestinians who wish for Syrians to return home, perhaps because she is part of a minority for whom the arrival of the new refugees was – somewhat – advantageous. It was them who changed her life: “three Ramadans ago” she left the Shatila camp, renting her previous apartment to her Syrian neighbors who were looking for a place to live.

There is only a fifteen-minute walk between Emm Ryad’s new apartment and her old neighborhood. The interpreter and I follow the form of her black abaya, weaving in between fruit and vegetable vendors, beggars, and garbage, on the main road in Shatila. Perpendicular alleys, so narrow you cannot walk in pairs, branch off on each side. Most of the buildings are hideous masses of cinder block. Suddenly, Emm Ryad turns left and climbs, in her plastic flip-flops, the fifteen dilapidated and almost vertical concrete stairs which lead to her old front door. Two adjoining rooms, a barely functional kitchen, and a bathroom, which she admits is “out of order”. In the story above, her son, daughter in law, and two of her grandchildren live in the same abject conditions.

She has come to watch them because their mother has a doctor’s appointment. “The (non-potable) tap water here is salty, there is no electricity, I look over my shoulder when I walk in the street for fear of knife attacks,” she describes.

New refugees as an escape from fate

The money paid by her Syrian tenants allows her to pay for half of her current accommodation, a large and frugally furnished apartment. The decoration on the walls is exclusively religious, save a few family photos and a flat screen. Two large rooms provide space for several of her six children: one of her single sons, her divorced daughter and her three daughters. “I am poor, of course, but now we are safe,” she smiles as she peels two oranges for us, the guests.

“Here, we are more comfortable physically, but above all psychologically,” she says, her daughter Rana and one of her grandsons next to her. They are visiting her this morning, though they still live in Shatila. “This apartment is a refuge for them, if something were to happen in the camp, they can come here,” she speaks through the plumes of steam wafting off the coffee before her on the table.

“In Shatila, many people use drugs, there are shootings and murders.” Her 40-year-old daughter Rana lost a leg in the War of the Camps and now works at the Palestinian embassy. She goes on further: “My building is located at the entrance to the camp, and the Lebanese security forces have the power to enter. There are wanted persons in my building, which is the constant target of raids. My children wake up and go to sleep with the sound of gunfire.” Once, one of them asked her why they didn’t leave like the Syrians, across the Mediterranean and to Europe, an idea that Rana rejected. Emm Ryad also wants to send them abroad, where their rights will be respected. “Here, we live in the physical sense of the word. We breathe, but our life is one of misery.”

Many thanks to Mohammad Hamoud for his quality translation into English and for his interpersonal skills.

(3) The massacre of Sabra and Shatila took place in September of 1982, during the Lebanese civil war. Christian militants entered the camp with the help of the Israeli army. The massacre went on for two days and resulted in several thousand deaths.

(4) Between 1985 and 1988, during the Lebanese civil war, the Shia militia Amal clashed with the Palestine Liberation Organization in various Palestinian camps located on the outskirts of Beirut.

How Columbus ruined my birthday

Israël/Palestine: How my obsession was born

Palestinians in Lebanon: being and wanting to truly exist

Naturalization: a step on the winding road to dual identity

The Color of Desire

Frizzy, Curly, Relaxed: Cover up that hair, which I can't endure to look on