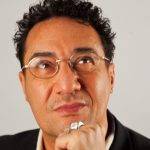 This morning, Yaya read this news. First without really believing it, then by allowing oneself to think that, yes, existence could bring good news.

2015. 2015. Dubreka, Guinea, 17 August: As of 10 August 2015, it has been five days since the country has notified any new cases. In order to maintain the goal of zero cases, the WHO, through its social mobilization and engagement teams deployed in the prefectures, is emphasizing communities' involvement, which is the main guarantee of reaching the goal of zero Ebola cases.

Five days? This morning, Yaya read this dispatch. First without really believing it, then allowing himself to think that: yes, existence could also bring good news. Five days, five weeks, five months. Five months since he arrived here in Hauptstadt 8 Berlin. Yaya lived in Mitte. Literally: the middle, the center. For the neighborhood had been, long, long ago, the trendy place to live. Long before the Wall made it the grim, first vision of the East, when those from the West left the subway, with its terrible armed checkpoint, to spend twelve hours - no more - on this side of the border. Wilkommen in die Deutsche Demokratische Republik But that was before.

The first time Yaya arrived here, in Berlin Mitte, he was far from imagining a place with a long and heavy history. Here, elsewhere? It didn't matter. Above all, he felt very far from Dubreka, at the bottom of the Smoking Dog Mountain, where he threw himself into the Bondabon waterfalls as a teenager. Where he tasted a rare commodity - books traded on the black market - that made him dream and think.
Even today, now living in the Berlin Mitte, everything around him signified that distance, at every moment. The faces, and above all the way the bodies moved, the smells, what people ate, their words, their silence.

Yaya had arrived in the middle of winter, a winter that overshadowed everything else. The cold eliminated feelings, all views of places, people, life. That's all there was, the cold, nothing else. A daily struggle. That icy breath that gripped the body, the whole body, when Yaya came out of that old building overheated with coal, to dare to face that icy wind.

His departure from Guinea was long thought out and prepared.
Yaya had not contracted the virus. At least, he had shown no signs of it. Luck, fate or injustice, who knows. He was the only survivor among his five lost sisters. Dead. Yaya was a living miracle, something strange, with no explanation. What is it to be alive when death has broken everything, stolen everything, so close to you? And then Yaya lost his job, and then his friends - except for young El Hadj, a long, thin boy with a pinhead who rapped under the handle of Hajji as if to exorcise his world. From morning to night, El Hadji walked along roads, squares and alleys, drowning in waves of syllables and spitting rhymes, in a nervous flow until he lost his breath. Until he couldn't take it anymore.
His words invaded the space. They bordered on the infinite. Strange chanting.

El Hadj Hadji was the only person around who didn't flee from Yaya. Everyone else was afraid. Fear of being contaminated. Panic in the air .
When they saw Yaya coming home from work or from the market, the neighbours would quickly barricade themselves in. Yaya lost his job, but he hung on and wanted to open a shop. However, no customers ventured to visit him.
Deserted, the shop. Fear drives you crazy, that's how it is. Fear excludes, and it reassures people. As a result, Yaya says to himself: "Since you escaped death, go live your life elsewhere. What's the worst thing that could happen to you? »
So the young pinheaded rapper, El Hadj Hadji, helped him to raise the cash for this long journey, a tricky task. He helped him organize everything to prepare for his departure.
And a few months later, Yaya found himself here, in the icy winter of Berlin Mitte, la Hauptstadt du Deutschland.

One day and a birthday, just one year after his arrival, Yaya read a small ad in Zitty, the famous alternative and cultural magazine.
Berlin, Shöneberg. Seeking roommate, nice independent room. Shared kitchen, bathroom and living room, very low rent. Other cultures welcome.
Since the development of the AFD (Alternative For Germany), many have been keen to publicly differentiate themselves from this sinister trend. A gesture that was certainly gratuitous, purely demonstrative: the troop of cheap Nazis was not recruiting from Zitty's readers. But the intention was there and Yaya appreciated the symbol.
Shöneberg was a nice place, quite charming. And this proposal could give him the opportunity to escape from community gatherings, turning after a while into something oppressive - however warm they may be.
He showed up at the address given during the quick but friendly phone call he had made to the advertiser the day before. The guy opened the door for him, smiling. He was in his fifties, the face of a guy who must have seen a lot of hardship, but who, Hamdullah,had done quite well.
He invited him to sit down and offered him a beer. Yaya accepted, even though the slightly bitter taste of the yellowish liquid that was flowing in the local bars wasn't really his cup of tea.
So the guy introduced himself.
- My name is Wolfgang. I've lived in Berlin since I was nineteen. Before that I was in Munich. I grew up there. Do you know it?
- No, don't know.
- It's okay, you didn't miss anything.

Yaya moved in with Wolfgang a week later.
The two men learned to discover each other, slowly, without forcing things. Sometimes they cooked together, Yaya loved schnitzel, those thin breaded cutlets served with red cabbage and potatoes.
Since his arrival in Berlin, he was immersing himself in novels and short stories. An avid reader. Wolfgang showed him his collection of vinyls, which he loved to crack under the diamond of his turntable while contemplating legendary album covers.
Wolfgang wanted to know more about Yaya’s country without wanting to riddle him with questions. He had noticed that the evocation of that time was difficult, even painful. So he was at pains to be discreet.
One night, he browsed the Web. No problem finding Dubreka, the Mount of the Smoking Dog and the Bondabon waterfalls that Yaya evoked with a luminous smile, a real smile at last. The photos made you dream.
But in the article just below, the news was turning into a nightmare. One name, one word ranged from testimonials to scientific contributions. Ebola.
Figures, gloomy facts that reminded him of the worst. Especially when he read the story of Mariame. The young woman recounted her illness and concluded with these words: "I wouldn't wish this thing on my worst enemy.

The terrible memory of Dr. Angermüller came and blew an icy air right there in the corner of his ear and stayed for a while, floating in the room, before finally evaporating into the air.

One night, one evening, they told each other everything.
Yaya had just met a woman who made him dream, to the point of humming soul tunes in his head that caressed his soul. To give this story a little chance, a chance for a future, he needed to say, it had to come out of him, from where everything was buried, there, there, in those inaccessible depths. Wolfgang had rebuilt himself from bits and pieces, also in silence.
Those dead, those stained faces, those emaciated, blinded bodies. Drained of their substance. Fleshless bodies.
Wolfgang, a vision came back to him, just like that, just by telling Yaya. As if it was yesterday. His first hospital appointment. The waiting, the waiting, hours. Finally, a nurse took him to another place dedicated to another wait, a kind of small salon away from the world. And that's when he saw her. A floating, wandering form, all lost in a pastel dressing gown - such a light blue mixed with a pale mauve tonality, of a strange softness. No face, no arms, no hands, you couldn't tell; just a fluidity that rippled between the walls. A di sintegrating life. A vanished soul.

And then there was the time of anger.

The whistles scream, shrill. Silence = death. White letters on black rectangles. A string of bodies spread out on a December asphalt. These bodies, these bodies collapsed on the icy asphalt of a Berlin avenue say that they are irremovable. Nothing will make them go away. Nothing, absolutely nothing. They're the states of emergency.

Wolfgang remained a spectator. Too lonely, too weak, too thin. Already between two worlds. One day in December, just before he tried his first tritherapy, he came across the screams and fury that were roaming the asphalt.

He moves forward, staggering between bodies he can’t see / invisible to his sigh, invisible to his gaze. Nothing touches him, nothing affects, nothing challenges him. Absent to pain, rage, violence. Absent, just absent. His skin is like an oil, nothing clings to it, nothing adheres to it. Still there, and already elsewhere.

Yaya, for his part, told of the bodies that were emptying, purging, expelling, burning, burned with fever. The corpses, their smell. The ordeal of his sisters, the youngest was twelve years old. Twelve years old... Absurd: staying here, alive, going on without being shattered. Moving on? Going through death as one goes through life.

And he's wandering around. One step, another. Glowing figure. He's no longer a man, he's a spectre.

Since we couldn't say and above all hear everything - nobody could do that - Wolfgang and Yaya took a notebook to write down yesterday's things. They gave it a name. Epidemics..
A dark tale, survivors' diary.

We wash our hands, we make people take their temperature. That's the price of passage. I'm going past all the posters: drawings of dying patients. I meet my friends in class. Platonic greetings, no more hugs and kisses. Ebola's on the prowl. Facinet Kabele Camara, An unwanted companion

Another book, another page.

Wolfgang was watching the night from the living room window. Yaya continued his reading.

The sun was bright. The slightest dirty water started to smoke. The days were hot, the nights cold. There was a case of cholera, a devastating one. The sick man was swept away in less than two hours. The convulsions, the agony, preceded by cyanosis and a dreadful cold of the flesh made the emptiness around him. Even those who came to help him retreated. Jean Giono, The Hussar on the Roof

Yaya lay down on the floor and declaimed almost silently. A whisper.

Without memory and without hope, they settled in the present. In truth, everything became present to them. It must be said, the plague had taken away the power of love and even friendship from everyone. For love requires a little future, and there were only moments left for us.  Albert Camus, The Plague

And then they went out to look at the snowy life under that long winter, as it was before. Almost light. Almost carefree. Life.

Marc Cheb Sun is self-taught. Founder of the media Dailleursetdici.news, creator of theatrical performances, he lives in Paris where he leads writing workshops with young people. His first novel Et je veux le monde ("And I Want the World") was published by JC Lattès in March 2020.