As a black woman and an accomplished actress, how will our forty year-old protagonist enter the world of online dating after the failure of a long relationship?

How silly we look with these things on our faces... I've been waiting for twenty minutes, sitting on the terrace of a café on rue Montorgueil. Autumn is looming and silhouettes curl up in the cold. I watch the waltz of people passing by, their facial expressions are no longer visible. We were used to sulking in Paris, but at least it was by choice at the time. Today, this accessory gives us a lunar expression as we try to capture in our empty eyes the touch of humanity, complicity. What a funny world…

Sometimes, as I see this panorama of masked superheroes without powers, I think back to last New Year's Eve. We were all wishing each other a great 2020, holding a glass of champagne, half drunk and full of good intentions... If only we had known we had three months of probation left... if someone had sent us a picture of ourselves today, we would have laughed and then frozen with dread. In the end, the item made its way into our wardrobe within a few weeks, without transition or resistance...

Anyhow, it doesn't help my case. For a single woman in her forties like me, to put a mask on probably halves my chances of deviating from the course of fate and accomplishing within a year what I haven't been able to do in the last twenty years: finally find a guy who is willing to have a baby with me.

At forty, I consider myself lucky, as an actress able to keep herself afloat financially, which is a feat for a black woman. It’s on a personal level that it goes wrong. I've had my share of stories, especially one that cost me ten years of my life... I could have been resentful, but I just accepted it. He didn't force me to stay after all. He's a director. We used to work together in London, which is where we first met.

He didn't want any more children because he already had two and he convinced me that it would interfere with his creativity as well as my career. We consequently chose to devote ourselves to each other, or rather, in hindsight, me to him. Until I had to return to France in order to look after my father who became sick. When I returned six months later, he had replaced me with a beautiful British Indian girl, who was enthusiastic for absolutely everything and who knew how to look at him as the genius he would never be. Raw reality struck me, a little as if I’d been living in a soap bubble that had suddenly exploded with a derisory pop!... It was over.

At first, I booked an Airbnb to maintain my routine, until I realized that wasn't exactly mine. My cell phone was now ringing for French fictions only.

Obviously, I had to move back to Paris. I haven't been short of work since returning. Nothing prestigious but several TV films and a series that will soon run on Netflix.

In my personal life on the other hand... a total wasteland! Which brings me here today, waiting for my crush, my date I recently met on the internet…

Sitting on the terrace, a book on the table, I’m pretending to be relaxed though my heartbeat belies it.

I have no idea what he looks like, we've been talking for a few weeks now and it's been quite enjoyable. The new ways of flirting are so unsettling. I'm part of the old world, where we used to run into each other in the subway or at a party. You would approach someone to get their number...

Last time this happened was in the early 2000s. Ever since, apps have reigned supreme over the dating world. At forty years old, all that seems so artificial.

But I had to start using them, my girlfriends were threatening to create a profile for me, by force, in order to change my situation. So one night I gave in. A few clicks, first name, presumed age, city, photo – a photo of myself seven years ago when I weighed eight kilos less and had fewer wrinkles – uploaded... and off we go.

I was surprised by the guys’ rapid responses, all profiles combined... The "hey my panther, coming to play in my savannah?", the "hi there..." or the "Grrrrr hot hot hot choc'"... I’d forgotten how irrational they can be. They imagine themselves in a safari at the mere thought of getting you into their bed. You are not a woman, just a category on a porn site, the "ethnographic adventure in an urban area" guarantee. This kind of stuff always bothered me when I was younger. I didn't understand why they’d get more stupid with me whereas they would say to my blonde friend nonsense things like "Your father stole the stars to put them in your eyes" or "Pretty miss, I have beautiful projects for you".

Besides, the guys I've recently chatted with seemed to want to impress me by being hyper-productive, ambitious, connected, super sporty or super knowledgeable. Always extra, deciding super quick if they're going to try their luck or not. Generally speaking in my case, it absolutely doesn’t get anywhere... it must be my outspoken confidence that freaks them out.

And then he appeared with a click... A "Hello, can we chat? You have a charming gaze..."

I liked that his remark was about my gaze, less trite than one about my eyes, a little as if he could see deep inside my soul without knowing me. So I accepted. And then we talked... for hours, to my surprise…

In the photo, he looked like a kid with a little gray hair. A kind of teenager who would have made his hair salt and pepper just for a costume party. He seemed to have the awkwardness of men who are aware that they don't belong to the alpha male category. His sensitivity radiated in this photo. It was his delicacy, his humour and his curiosity that hooked me.

He is a carpenter... surprisingly in the Paris region, what a surprise. He's also a slender and gentle woodworker. I wouldn’t have expected that. He works on wood, designs furniture, and creates with his hands. He says it helps him to channel his thoughts and control his overflowing emotions, and it makes him feel useful.

The concentration required for his art brings him serenity, a serenity that our modern world disturbs on a daily basis.

He believes that everything goes too fast, that we don't take the time to listen and appreciate each other. We consume things and get bored before we even enjoy them. And I rather agree with him. His approach interested me in a compelling way. It's quite unusual today to hear that. I expected him to pressure me into meeting on the next day, as my friends who are enthusiastic practitioners of this type of dating had told me. They make me laugh my head off when they tell me about their problems with guys who want to get coffee after three clicks and sex right after coffee. I enjoyed these quiet web interactions at first and then I started doubting. What if he was hiding something, a deformity or an unmentionable secret? I analyzed all his confidences to find something. Then, after three days, he told me that he wasn't in the Paris region for the next two weeks. He is currently working in Burgundy, in a friend's workshop, as a backup for a very special order that requires a lot of craftsmen. I was reassured from there.

We talk every night. We've established this night-time routine. We connect around 10 or 11 p.m. after having gone through our day, when calm finally falls on our lives. Our nights are shortened by this modern-day epistolary correspondence. We haven’t spoken yet, writing seemed obvious so as not to break the charm, to let desire rise. And it perhaps enabled us to tell each other things that we wouldn't have dared to express verbally. It's funny, but I feel like I know him, even though I only have a photo, with no sound, and above all no certainty that what he’s told me in confidence is sincere. I want to believe in it, because there is an old-fashioned perfume in our discussions. We update the romantic exchanges of olden times, with the instantness of the third millennium... Every night I anticipate our discussions a little more, I eagerly await them and even catch myself smiling in the middle of the day, just thinking about them. My brain runs at full speed, imagining him, I’m probably embellishing his qualities; I am aware of it, but all that amuses me. Then by dint of writing, we ended up concluding that we should break the ice and face reality by finally meeting.

Now I am a little apprehensive, I hope that our encounter will not dissolve the magic that has set in. But then again, I don't expect to see a gaudy-looking African-American star, it's rather the opposite. I imagine him simple, sober, not a boisterous personality but full of soul, a deep look in his eyes, a nervous silhouette and a smile that’s earned, a frank smile that he doesn't give to everyone.

We'll see. I'm a bit early, I wanted to get here sooner to look relaxed. I don't know where all this will lead me, but this staging is odd. The twenty-year-old girl I was, would never have imagined herself at forty, waiting for an unknown potential flirt. What a lame situation, I would have said to myself. After all, it's sociologically interesting, especially in our time, with masks on our faces and this gloomy atmosphere. Now I'm getting nostalgic for things that I used to find mundane, believing that this virus hinders our bodies... and our minds, too.

Never mind, we're not going to prevent ourselves from exploring, hoping for love... Covid or not, we're going to give it a try, raise the curtain and see what's going on on the other side.

I think he's coming... It could be that short-haired mixed-race man with a book in his hand that I'm waiting for… He steps forward hesitantly and scans the terrace, in the search of the beautiful thirty-year-old whose gaze he fancied... Well, I'll have to tell him about my age. I am not bold enough to call out to him, he is sexy in his faded jeans. I wait a few seconds before lifting my book in his direction. I smile at him, but he doesn't see it. His eyes seem to be squinting so I think he's smiling too, unless he's wincing because my silhouette... turns him off. How silly we look with these masks. I stand up to give him a kiss... Oh yeah, right... We have to avoid hugs... Very convenient for baby-making. All in due time, I'll think about the ways and means if we have to get closer one day. For the time being, I reach out my arm and ask him "elbow-bump?” 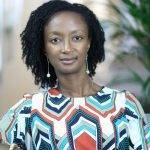 Journalist and author of three books, I share my time between the cosmetics company I created and my editorial activities. The themes related to identity and exile paths cross all my projects.