|| Nostalgia for the Future 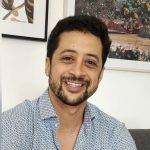 It's the big day. That of a lifetime. However, if she's 15 minutes late, Izadora won’t be allowed to take the test. Stuck in the traffic jams caused by the floods, she loses all hope. But for Edilson, her friend from Villa Kennedy who drives her there, giving up is out of the question. Foco. Força. Fé.

Forty-eight minutes. That’s how much time is left for Izadora to get to the examination room.

The Avenida Brasil is followed by the expressway, Linha Vermelhawhich runs along the sea to reach the southern side of the city, but the traffic remains slow on the soggy asphalt. Edilson may honk his horn, but to no avail. He turns on the radio as if looking for a diversion. Jorge Ben Jor drags his hoarse voice over a sad samba tune:

(It rains rain / It rains without stopping)

Although it has stopped raining, the sky is still full of those clouds that Rio de Janeiro never knows what to do with. Rio is a city made for sunshine just as some people are only made for joy. Outside of these conditions, they wander around, lost. The city has a thousand distractions, only the sun gives it a raison d’être.

To their left, on the other side of the strip of water, on Governor's Island, lies Rio’s international airport, Galeão. Izadora watches the planes, insolent with ease, taking off.

“Forget it, we'll never make it," she whispers.

“If you arrive more than fifteen minutes after the exam has started, they don't let you in.”

“So what, you’d drop out of it, just like that... Three years you've been preparing for this test, and now you're finally here, qualified for the second phase... And at the best university…”

“And with a full scholarship…”

“And you want to give up... I should take you to the mental hospital instead, minha filha(‘girl’)!”

“Don't wanna hear it... Be tired tomorrow! Today, you're gonna go to that damn test and pass it!”

Izadora runs her hands through her hair, takes a deep breath. Edilson goes on:

“What you do, you do for you. First for you. But you're also doing it for us. For all of us. You know that, right? You know that's important, don't you?”

“I know it's important. I even know it a little too well. Fabiana keeps telling me: we're leading the way.”

Edilson's eyes spit fire. The vehicle would split the flow of cars in half like Moses parting the waters, if it up to his will alone.

Izadora repeats this mantra to herself. Her heart shrinks at the thought of disappointing those who have placed so much hope in her. She feels her cell phone vibrating in her bag. She lets it ring in the void, unable to answer the calls of her mother, her sister. She finally relents with a text message: "I'm on my way," without being sure which “way” she’s referring to.

Fabiana, Edilson, her Mother. Her own personal trinity.

Near the Maracanã stadium, Edilson gets off the main road and rushes through the hilly streets of the Sao Cristavão neighbourhood. He slows down, scanning the building façades, as if looking for something. Izadora doesn't dare ask him what. Perhaps he finally admitted that their expedition was doomed to fail?

Without warning, he gets out of the vehicle and hails a boy standing on his motorbike in front of an Internet café. Hands him some money. Shortly afterwards, he makes big signs towards Izadora. Who doesn't understand. Edilson comes halfway back to the vehicle, a motorcycle helmet in his hand. “Well, are you coming?” He shouts at her.

And there they are, on the motorbike, thrown into the Andre Rebouças tunnel, zigzagging between the cars, taking all the risks. Like in a video game. The honking and cursing of upset car drivers doesn't slow Edilson down. On the contrary, it speeds him up. He exults in the manner of a supporter who’s team is behind on the scoreboard: “At Villa Kennedy, we don’t give up!” Izadora thinks he’s going to receive a real dressing-down from his uncle when he finds out where he has left his van. And her mother... Her mother would have a heart attack if she saw them like that. Yet she feels safe, huddled against Edilson's back, her hands around his waist. She feels like nothing could happen to them.

But on the avenue along the Lagoa River in the South Zone, near where the Favela Praia do Pinto once was, forty years ago, military police patrols are multiplying. Edilson should slow down. Izadora doesn't dare tell him. She sees the time on her watch, the moment she should be seated in front of her exam paper draws irresistibly closer, just as the distance between her and that place is shrinking. Edilson knows it and continues to navigate between the cars, to dribble past the red lights. Out of question to slow down. Bairro Gávea, Praça Santos Dumont in sight, they're almost there. One red light too many, the Military Police are sounding their sirens. They have to stop.

“We were almost there,” lzadora says, saddened, while taking off her helmet.

“Run, Iza!” Edilson orders, taking the helmet from her hands. “The building is right on the other side!”

“Wait, what are you going to…”

And there she runs, Izadora. She runs like mad. Thinks she hears the police asking her to stop. Doesn't dare turn around to see if it's a figment of her imagination. Doesn't dare turn around for fear of the treatment Edilson will receive, the treatment they dish out to young Black men, to the favelados, will drain the strength from her legs. Draining all desire for a future.

So she runs even faster, Iza.

Don't miss the next stories...!

Co-Founder of Frictions and Director of Publication. I'm an author and a digital expert. And an incurable globetrotter. I've lived in several foreign cities. I speak five languages. And the greatest gift I can be given is to be told a good story.