Maud Serpin, author and daily consumer of social networks, until this use turned into a second job. To abide by the rules of the algorithm and produce always more, is it really leisure? If this hobby becomes a job, then Maud decides to quit.

A few months ago, I uninstalled Facebook and Instagram from my phone — an anticipated hibernation. I am the co-producer of a podcast — a non-profit side passion project — and having said that, these apps have come in quite handy: to spread the word about our content, attract new subscribers, and expand a small but interested community… The classic webmarketing ritornello. Yet, I felt no lack, just a great relief to be able to stop going on these two apps in order to make posts and stories, or like and comment publications.
At times I had the naive but exquisite illusion that my sleep was a general shutdown of Instagram and Facebook, according to that dangerous adage I fondly use occasionally: “What I don’t know simply doesn’t exist.” At other times, I also considered social networks as far-flung countries, worlds apart, which would continue to live by their own rules and practices — similar to the “magic circle” that historian Huizinga referred to when defining play spaces: “temporary worlds in the heart of the usual world”. No more playing was, in my case, a pure delight.
I wondered how I got to this point, after years of producing free content online. Why had weariness gradually replaced pleasure in these activities? And why was I so much enjoying this digital detox?

In 2006, when I started my very first job in the digital department of a communication agency, social networks were almost non-existent. But forums and blogs were swarming, conversations buzzing everywhere. We were talking about “web 2.0” and of “user-generated content”, a barbaric term to explain that users could fully be co-founders of the Internet that was taking shape at the time — O’Reilly often spoke of “user added value”. While social networks were deploying, there was at that time a strong belief in the original ideals of the web: access to information, free information, horizontality of knowledge and skills. Everyone believed in the new technologies as a vector of positive social change. It was also, as Patrice Flichy wrote in 2010 in Le Sacre de l'amateur, sociologie des passions ordinaires à l'ère du numérique [“Consecration Of The Amateur: Sociology Of Ordinary Passions In The Digital Age”], “the rise of the amateurs [...]: these passionate people who are neither novices nor professionals, but brilliant all-rounders. Thanks to computers and the participative web, they have invested all aspects of contemporary culture. Their practices are profuse and often pioneering, and have changed the way we create artworks, diffuse information, generate knowledge, and engage in activism.”

In my professional ecosystem, many people were creating and producing content on the Internet. Blog posts, tweets, videos... we were constantly expressing ourselves. And at a time when brands were starting to monitor their e-reputation, the same idea started to make sense for individuals: to consciously build an online identity, monitor your image. And if possible gain notoriety. Do you remember Klout? This tool — which I abhorred — evaluated the social influence of an Internet user by mixing different statistics from his practices on the networks. We were then given a score that we could brandish proudly as soon as it flew a bit high. We were encouraged to produce relentlessly and to devise strategies to promote this content as cleverly as possible. We had to trick Google's SEO to make our blog appear in the first search results, choose our #followfriday on Twitter to get noticed by the influencers, or buy fake fans to increase our community (well I wouldn't classify this last one as a smart strategy).

I am speaking in the past tense, but you know how the story unfolds: nothing has changed today. The phenomenon has simply increased substantially with the boom of smartphones and the proliferation of all the content produced from these little devices, photos, audios and videos — and of course with the increase in the number of people producing every second of the day and night.

More than ever, everything is baked in platforms and apps so as to keep our attention as a user. As Tristan Harris explained in 2016 in a now famous Medium post, “How Technology is Hijacking Your Mind — from a Magician and Google Design Ethicist”, there are a multitude of techniques, whether in user experience or interface design, that exploit our cognitive biases and psychological weaknesses, with the ultimate goal of getting us to spend as much time as possible on the site, network or app in question. With that bitter aftertaste in our mouths that we all know: What have I been doing for the last 45 minutes? Literally nothing, I've just been watching those Facebook videos that play automatically one after the other (that's hijack number 6 identified by Harris: Bottomless bowls, Infinite Feeds, and Autoplay).

And everything is also geared, on these same platforms and applications, for content creators to produce and promote relentlessly, in a constant struggle for visibility. In fact, the initial content (be it a podcast, an article, an illustration...) is never enough in itself. You have to constantly produce meta-content on social networks: to keep your account fed, to occupy the field and to hope that the initial content will be noticed. Let's take the example of Instagram and its voracious algorithm, which asks a lot in exchange of a little exposure — to quote a tweet that I read in January: “to gain visibility, every week you'll have to supply it with: 3 posts in feed, 8 to 10 stories, 4 to 7 Reels, 1 to 3 IGTV”. So you have to feed the beast, copiously, and at the right times. But with tact, otherwise you will lose the subscribers you will not have sufficiently “engaged”, and who will have grown weary.

You also have to keep up with the pace and join the hectic flow — Trying to create based on your needs and listening to your desires has proven pointless to me. For example, once again on Instagram, if you distance yourself for a while, the network “punishes” you by reducing your visibility — and here you go, a slight step backwards.

And yet, when you create, and it works, you have no reason to stop. Quite the opposite. Your “community” rewards you with likes, comments, reposts and more. You feed the community and you feed the algorithms which thank and reward you with new subscribers, but who — like ravenous animals — stick out their tongues to receive always more.

One day when I was preparing content in advance and scheduling it for the whole week — impossible to do otherwise! — in order to promote the latest episode of the podcast, I really felt like I'd put my finger on a never-ending spiral. Yes, it was exciting to get positive feedback, yes, it was gratifying to see the number of subscribers grow, yes, it was sometimes a delicious ego booster to receive a like from a highly regarded person.
But wasn't it terribly laborious and exhausting in the end? Could this activity still be enjoyable when the main concern was visibility — and thus permanent allegiance to algorithms?

For a long time I thought that creating non-remunerated content was something close to a hobby, a bit like that absurd category in the resume, where you can introduce yourself saying, for example, “I'm a consultant and I have a blog about vegan food”. The “real” job that allows you to earn a living versus passion, done for genuine pleasure. In reality, the boundaries are much more blurred between a “real” job and our digital productions.
What actually distinguishes an amateur blogger from a professional blogger, who lives of his platform? When both are talented, not much — except for the income. On the other hand, they share a lot: writing and promoting content, interacting with their community, being responsive, tracking and analyzing metrics, maintaining their blog, etc. In short, time invested and tasks performed with assiduity that resemble what we usually put behind the word work.

Moreover, remuneration is not an operative category for thinking about “work” on the Internet. This is what Antonio Casilli and Dominique Cardon explained early on in 2015, when they contributed to coining the concept of “digital labor” known in France — a term showing that behind our daily digital actions lies an invisible work — all the more invisible because it is not perceived as work by Internet users. A work insofar as these uses generate value captured by digital companies. Each like, each click on a Google search result, each profile update creates valuable metadata to improve services (and of course, to optimize advertising targeting). For example, by designating an email as spam, I improve the functioning of the Gmail spam detection algorithm. However, “Gmail's spam detection algorithm can only work if a large number of people designate an email as spam”. It is therefore a mass of non-remunerated users who work daily for large digital companies.

To be honest, I am worn out — not only from working indirectly for digital companies, graciously delivering value to them, but of bending to their injunctions and desiderata for so long. Where is the pleasure of creation if constraints seem overly important to me?

It was therefore with a sigh of relief that I uninstalled Instagram and Facebook. I certainly felt like I was stopping a form of work, with invisible and heartless managers. And with unrealistic goals: I felt like I was contributing to a system that fully endorses the overload of content. This frantic race to over-produce and over-consume made my head spin. This race for attention. As one of my “ASMR-tists” idols, that I listen to at night sneakily and who was celebrating her two million subscribers on her channel, says: “I want to thank you for your time, that you invest into my channel even though you have literally millions of different things to watch, any second of your time — and you chose to watch my videos.”

Our time, our attention is a limited resource. However, the offer available to feed it has never been so abundant on the Internet. And while we are able to adapt our lifestyles — at least, to think about it — to address the societal issues we have to face, we continue to produce and consume digital content at full capacity. And too bad for the CO2 emissions, but in our representations the materiality of digital content is completely absent. Yet, according to the Shift Project, 1% of the world's pollution is caused by watching videos on the Internet (Can you imagine the pollution caused by the entire Internet?).

I don't like the radical injunctions of a “digital detox” or to “disconnect!” that don't solve the problem and only make the users feel guilty. On the other hand, in my La la land dreams, I aspire to a milder consumption and production, without performance stakes, in which the greedy side of algorithms would be replaced by frugality, where the organic would take precedence over the viral and the paid. And where, perhaps, for amateurs, the feeling of “working” would fade away in favor of a rediscovered pleasure. 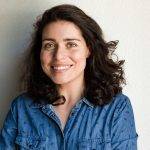